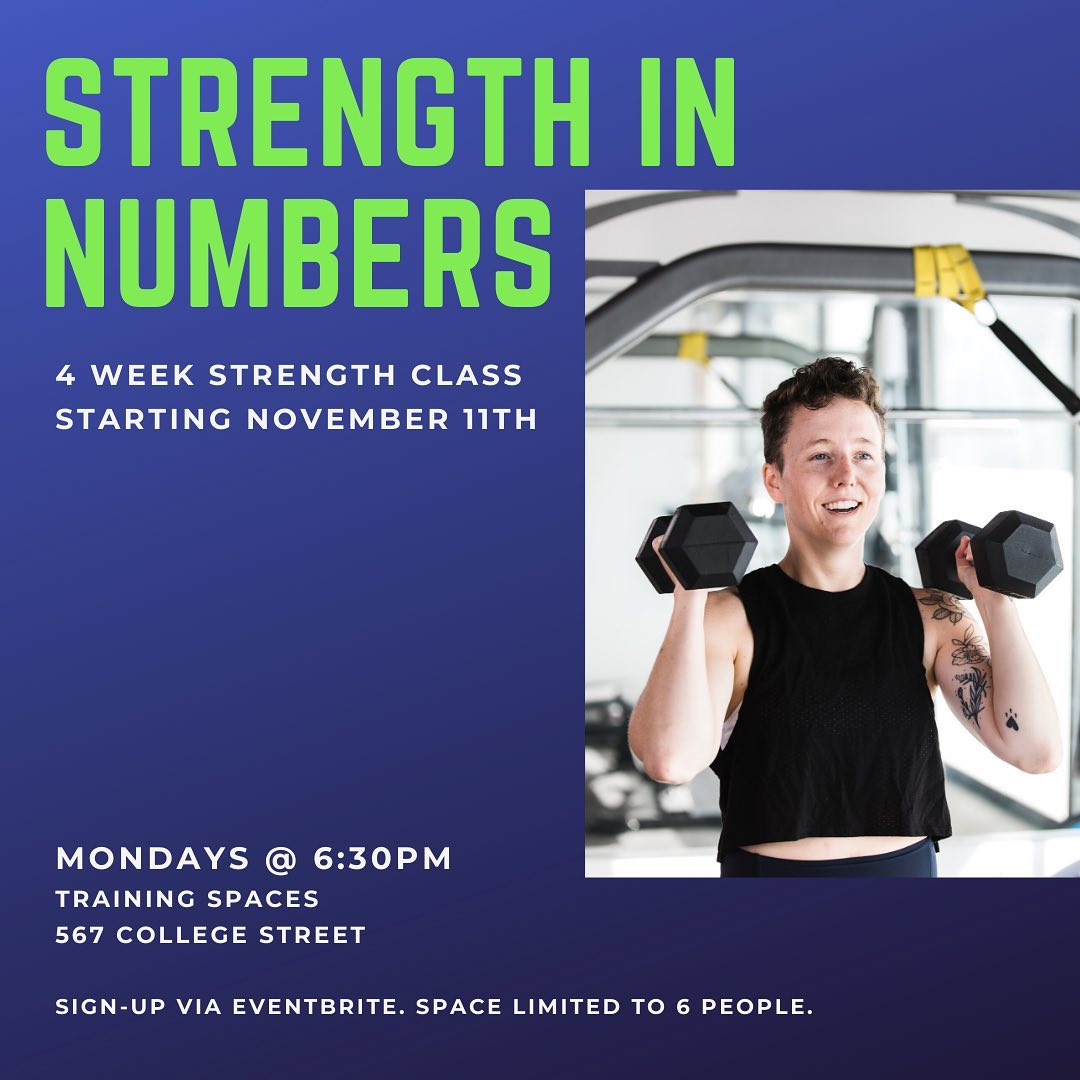 Following up on her Monday-evening Electric Circuit series, Ali is  offering a series of four one-hour sessions dedicated to strength training. From her description:

It’s a commitment to carve out an hour each week dedicated to moving your body, to strength as self-care and building up a strong foundation for future you!⁣

The classes will run from 6:30 to 7:30 pm on Monday nights, starting Nov. 11. For more information or to sign up, contact Ali at [email protected] or visit the Eventbrite page.

Can’t motivate yourself to exercise? Consider these added benefits​

No matter why you exercise, you have a good reason for doing it. Whether it’s about aesthetics or recovering from an injury, we all turn to exercise for a variety of reasons.

But there are days when the idea of hitting the gym is the last thing you want to do. Maybe you’ve been really busy at work or have had your routine disrupted by illness. You might be frustrated, balancing risk vs. reward and wondering why you aren’t seeing results fast enough. In fact, you might just think “why bother?”

When your usual source of intrinsic motivation fails, here are some unexpected benefits of exercise that might convince you to put on those running shoes.

Exercise is good for your heart: Exercise strengthens your heart and improves your circulation. This helps lower your risk of heart diseases, your blood pressure, and triglyceride levels.

Exercise can make you more creative: A study at Leiden University found that people who exercise regularly performed better on tests that assessed creativity. This is because exercise stimulates the growth of cells in the hippocampus, a part of the brain responsible for imagination.

Exercise can help you fight off colds and flu: Even if your flu shot is part of the fall tradition, physical activity has been directly linked to producing antibodies that protect us against various illnesses and diseases.

Exercise keeps your brain fit: Exercise increases growth factors, a brain chemical which helps make new brain cells and establish new connections to help us learn. It also improves our capacity to learn by enhancing our attention and concentration skills.

Exercise can modulate the risk of dementia: A number of studies have found a relationship between people who exercise and dementia. These studies suggest that you can affect your  risk of dementia through regular physical activity — and one even concluded that staying active reduces the risk of Alzheimer’s disease risk by 45%!

There is always a reason to bother when it comes to exercise. Our society has become so obsessed with the idea we need to sweat to be successful that we’ve distanced ourselves from some of the benefits of exercise. Yoga, once only thought of as a moving meditation, is now about maximum calorie burn! Yes, exercise can help you burn calories — but it can also reduce your stress hormones, help you sleep better, boost your self-esteem, and alleviate depression.

Time spent exercising, whether it’s cardio or stretching, is always a good thing. It’s never a waste of time and the benefits, even if you can’t see them, are significant. 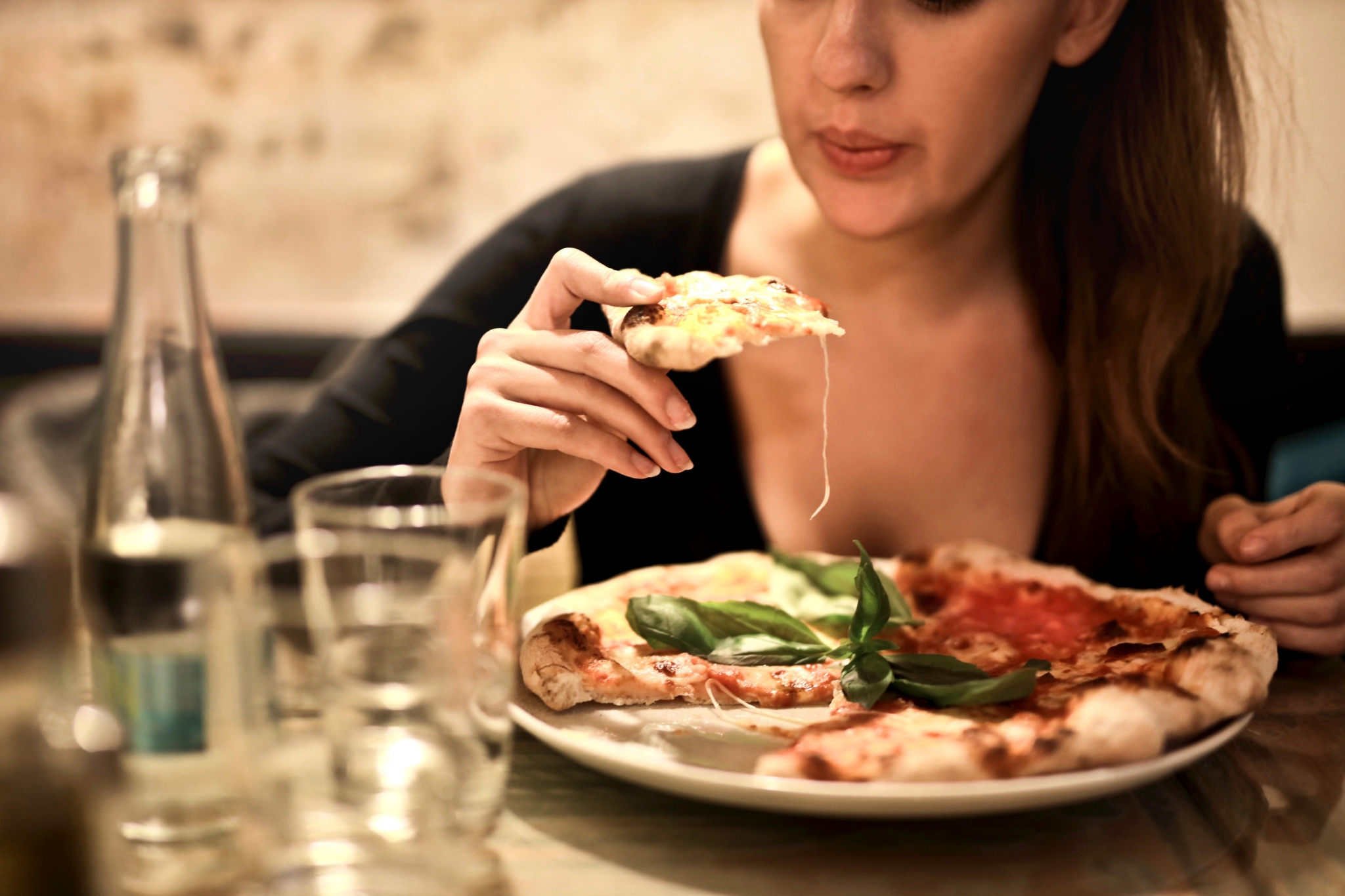 I’ve heard so many different things about what to eat before, after, and during workouts that it can be complicated to figure out what’s the best strategy. In order to get the maximum benefit from your time at the gym, in a class, or on a run, you need to think about fuel. And not surprisingly, the fuel you choose is dependant on your goals. That means you need to consider the type of activity you are performing before selecting a snack. For example, you don’t need to carb-load before a pilates class!

Before a workout, it may be better to eat a meal that focuses more on protein and carbohydrates than fats. Protein can increase the amount of muscle mass gained from a resistance workout. Consuming the right amount and right kind of carbohydrates before a cardio-focused workout will ensure that your body has enough energy to perform well.

No matter what you eat, there’s technically no need to snack right before you exercise if your workout lasts less than 60 minutes. It won’t give you added energy — but it may keep you focused on your workout and off feeling hungry.

Timing is also important. Make sure you eat a meal or snack 30–90 minutes before you work out. This will reduce bloating. Working out on a very full stomach can lead to cramping and general uneasiness. While you don’t want to pass out from hunger when doing your squats, you also don’t want to feel like you’re going to throw up in downward dog.

But what about eating after a workout? During an exercise session, energy is depleted, muscle tissue is damaged, and fluids (along with electrolytes) are lost through sweat. Post-workout nutrients are essential and help stimulate protein synthesis to repair and build new muscle tissue and restore fluid and electrolyte balance.

There are no real rules when it comes to fuel and exercise. Everyone is different but the key is to keep your pre- and post-workout snacks focused on protein and carbohydrates.

The Future of Fitness Explained: a primer on MCT oil and some of its supposed benefits

If you love to learn about new exercise and fitness trends, The Future of Fitness explains it to you in a way you can understand and separate the hype cycle from actual results.

You may have heard of MCT oil as the silver bullet to supercharge your exercise routine, brain power, weight loss, fight Alzeheimer’s disease, and decrease sugar cravings. It provides you with energy and puts you into ketosis (see The Future of Fitness Explained: The Keto Diet if you need a refresher on Ketones and Ketosis). But MCT oil has also been accused of causing unpleasant side effects and has been called an expensive health trend whose only effect is taking your money.

What is MCT oil? Medium chain triglycerides (MCTs) are partially man-made fats. MCTs are made by processing coconut and palm kernel oils in the laboratory. Because of the shorter chain length of the fatty acids, MCTs are rapidly broken down and absorbed into the body. Unlike longer-chain fatty acids, MCTs go straight to the liver and can be used as an instant energy source or turned into ketones. Unlike regular fatty acids, ketones can cross from the blood to the brain. This provides an alternative energy source for the brain, which ordinarily uses glucose for fuel.

How can I use MCT oil? You can’t cook with MCT oil, owing to its low smoke point, which is far lower than most commonly used oils. It is most often taken as a dietary supplement. MCT oil is flavourless, tasteless, and colourless. This means it can be added to salads in dressings or used in beverages.

Does it work? MCT oil has been called a super fuel since your body absorbs MCTs more rapidly than long-chain triglycerides. They can be quickly broken down and they can be used as an immediate source of energy. This can create the mental sense of clarity that many people experience when using MCT oil. When it comes to weight-loss claims, some research suggests that replacing other dietary fats with MCT oil may be beneficial. However, MCT oil is high in calories. A tablespoon of MCT oil contains 14g of fat, 100% of which is saturated and 115 calories. Benefits like detoxification and improved athletic performance are supported by little, mixed, or no evidence.

Should I Try It? It’s very rare that I tell people to stay away from a product. But for some people, myself included, MCT oil can cause significant gastrointestinal distress. You might have seen the word “liver” in almost every paragraph of this summary. High doses of MCT oil may increase the amount of fat in your liver in the long term. That’s why MCT oil is not appropriate for people with liver damage or disease. If you have any liver or gallbladder issues, you should stay away from anything that includes MCT or uses the word “bulletproof” in its name or labelling.

If you know your health history and haven’t experienced these types of issues, you can consult with your doctor or see how your body reacts. If you feel uncomfortable, stop immediately.

Try these links and get educated about the pros and cons of MCT oil: 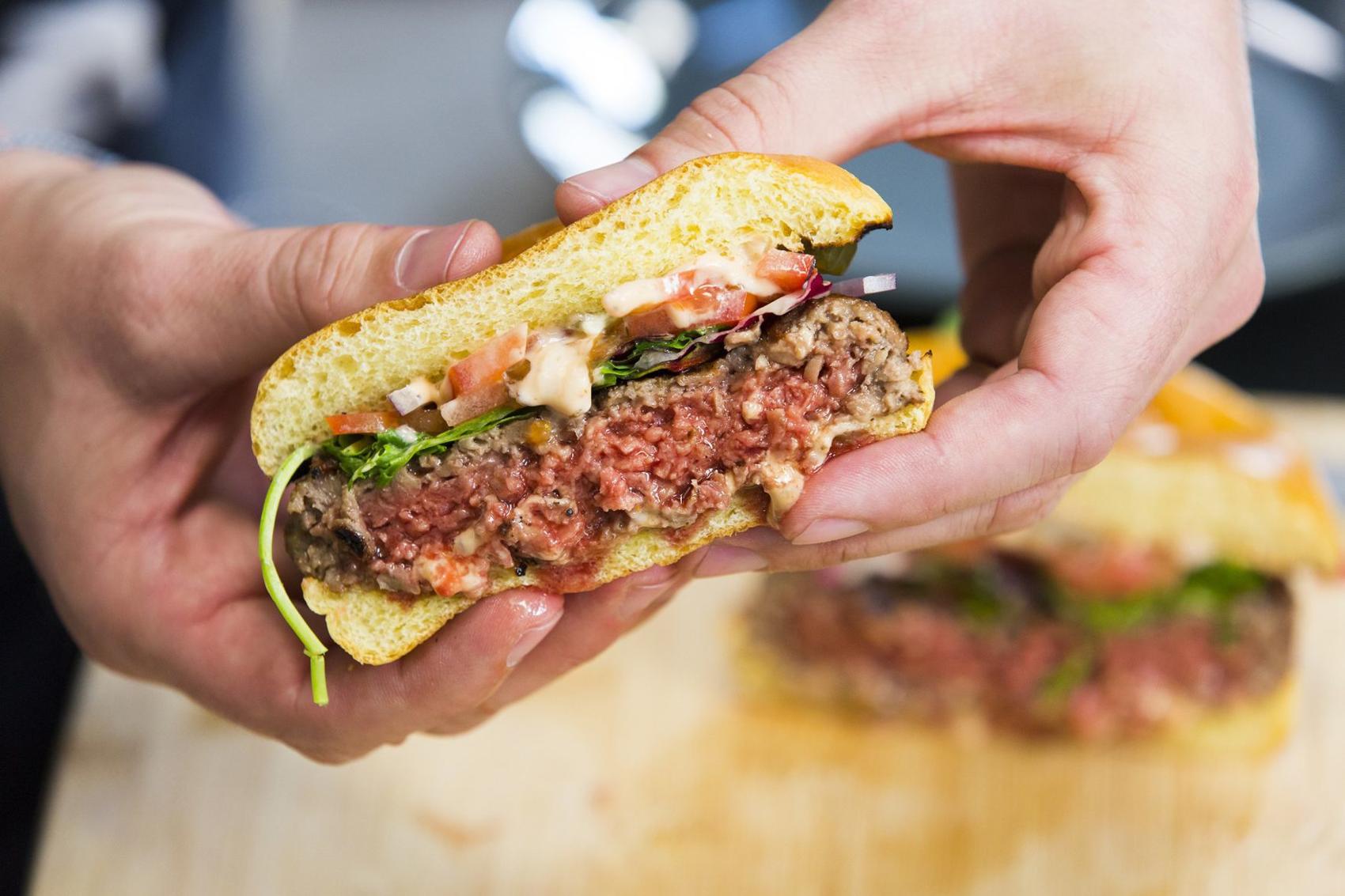 Fake meat may be getting a lot of play, but is it healthy?

This summer, fake meat went mainstream. It felt like every restaurant chain was boasting meat-free versions of their menu options. Products like The Impossible Burger and Beyond Meat moved confidently to the frozen food section. Even the most committed carnivores tried meat replacement burgers, chick’n fillets, and kale sausages. When products advertised themselves as reputable substitutes to meat, they emphasized their texture and taste. Like the Pepsi challenge of the 1980s, meat eaters were being fooled into accidentally eating vegan — and they weren’t complaining.

Veggie burgers have come a long way. Once constructed from peas, corn, and some sort of sawdust-like binding agent, it was rare to find a vegetarian option that didn’t need to be smothered in sauces to become edible. As soy products evolved with a societal demand, and we learned that being meat-free didn’t mean we were relegated to soft tofu, vegetarian brands became supermarket staples. For many people, the flexitarian lifestyle (eating a mostly vegetarian diet, occasionally including meat) is a healthy solution.

It’s rare that your vegan best friend will complain that they miss the taste and texture of beef or the crackle of chicken skin. When you think about it, meat replacement products that boast these attributes are geared towards the occasional meat eater. So if you love the taste of a burger, but find the sustainability of raising cattle hard to stomach, beefless alternatives are worth a try. Plant-based burgers use less water and generate less greenhouse gases.

But, let’s not lie to ourselves. A burger is a burger. And a burger, impossible or not, is not healthy. They contain mostly soy or wheat protein, as well as added preservatives, salt, flavourings, and fillers to enhance its taste, shelf life, and texture. The Impossible Burger has more sodium with 370 milligrams, or about 16 percent of the recommended daily ceiling versus 82 milligrams in a beef burger.

Would I recommend switching to these new meatless products for health? The simple answer is no. If you are sensitive to soy, salt, or wheat, these new burgers should be avoided. There are other alternatives, though they have not received the benefit of the buzz media cycle, that contain whole grains and legumes that would be a considerable alternative. They are the more traditional veggie burgers and contain less genetically modified and processed ingredients.

There’s nothing wrong with the occasional burger — be it beef, turkey, chicken, soy, or bean. While increasing options to suit all dietary restrictions is a positive step, we have to educate ourselves about our choices. We also have to be truthful and ask ourselves why are we deciding to eat something — is it for ethical reasons, or because we think it is better for us? By questioning the hype cycle, and becoming informed consumers, we can make better choices for ourselves and for the welfare of the planet.